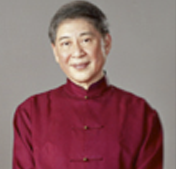 Kenneth Pai (Chinese: 白先勇; pinyin: Bái Xiānyǒng; Wade–Giles: Pai Hsien-yung) is considered one of the greatest living writers of Chinese fiction and an author of seminal works of Chinese modernism. He was born in Guilin, Guangxi, China at the cusp of the Asia-Pacific War. In 1948, he moved to Hong Kong and onto Taiwan in 1952. In 1956, Pai enrolled at National Cheng Kung University as a hydraulic engineering major. The following year, he passed the entrance examination for the foreign literature department of National Taiwan University and transferred there to study English literature. In September 1958, after completing his first year of study, he published his first short story “Madame Ching.” In 1963 he went abroad to study literary theory and creative writing at the University of Iowa in the Iowa Writers’ Workshop. After earning his M.A. from the University of Iowa, he became a professor of Chinese literature at UCSB, and has resided in Santa Barbara ever since. Pai retired from UCSB in 1994. His many works include Taipei People 臺北人 (1971) and Crystal Boys 孽子 (1983).