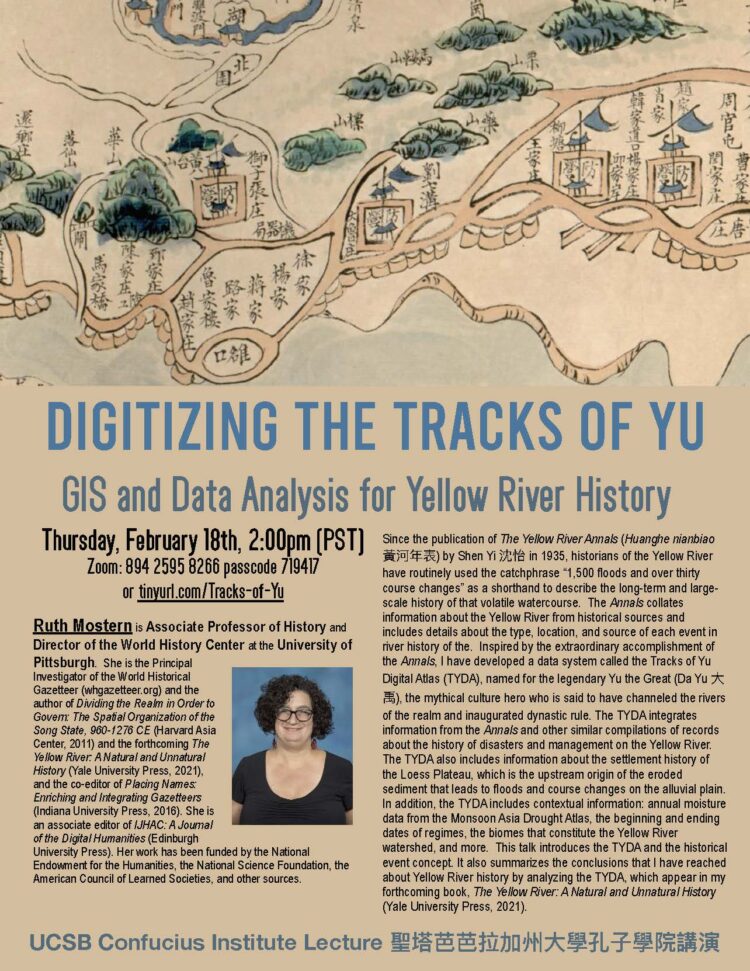 Please join us for a lecture with Dr. Ruth Mostern to learn about GIS and data analysis for Yellow River history.
“Digitizing the Tracks of Yu: GIS and Data Analysis for Yellow River History”
Thursday, February 18, 2021    2:00pm (PST)
tinyurl.com/Tracks-of-Yu (Zoom: 894 2595 8266 passcode: 719417)
Since the publication of The Yellow River Annals (Huanghe nianbiao 黃河年表) by Shen Yi 沈怡 in 1935, historians of the Yellow River have routinely used the catchphrase “1,500 floods and over thirty course changes” as a shorthand to describe the long-term and large-scale history of that volatile watercourse.  The Annals collates information about the Yellow River from historical sources and includes details about the type, location, and source of each event in river history of the.  Inspired by the extraordinary accomplishment of the Annals, I have developed a data system called the Tracks of Yu Digital Atlas (TYDA), named for the legendary Yu the Great (Da Yu 大禹), the mythical culture hero who is said to have channeled the rivers of the realm and inaugurated dynastic rule. The TYDA integrates information from the Annals and other similar compilations of records about the history of disasters and management on the Yellow River. The TYDA also includes information about the settlement history of the Loess Plateau, which is the upstream origin of the eroded sediment that leads to floods and course changes on the alluvial plain. In addition, the TYDA includes contextual information: annual moisture data from the Monsoon Asia Drought Atlas, the beginning and ending dates of regimes, the biomes that constitute the Yellow River watershed, and more.  This talk introduces the TYDA and the historical event concept. It also summarizes the conclusions that I have reached about Yellow River history by analyzing the TYDA, which appear in my forthcoming book, The Yellow River: A Natural and Unnatural History (Yale University Press, 2021).