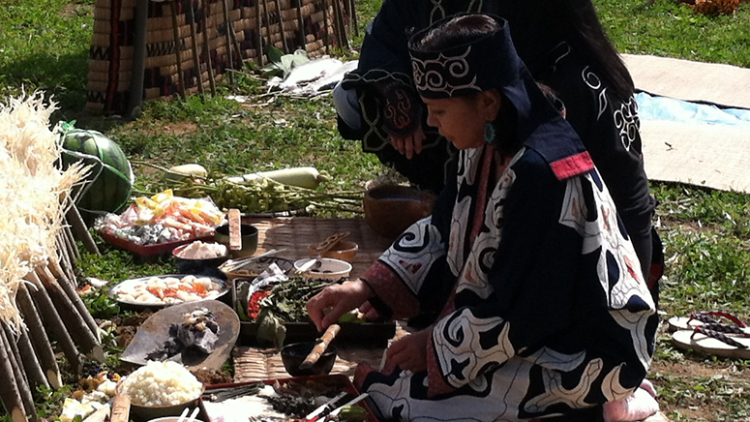 Join Prof. Ann-Elise Lewallen on Wednesday, February 10, at 5:30pm Pacific Time, as she delivers a guest lecture for the University of San Francisco on “Ainu Indigenous Modernity in Japan: Bringing Our Ancestors Home.” Event Description:

The USF Center for Asia Pacific Studies welcomes Dr. ann-elise lewallen (University of California, Santa Barbara) for an examination of Ainu colonial reckoning and eventual repatriation that unmasks the ongoing violence of settler colonialism in Japan and the ways that honoring kin relations and ancestral places enables a healing process to begin.

In Japan, Ainu experiences of Indigenous modernity have been shaped by a trifecta of settler colonialism, violent interruption of Ainu kin relations with land, and severed kin ties with birth communities due to urbanization and economic pressure. From the mid-19th through 20th century, the Japanese state instituted assimilation policies reinforcing racialization of Ainu bodies as distinct from ethnic Japanese. Thousands of Ainu ancestors were robbed from their resting places to be used for research into “evolutionary origins.” From 2016, while courts ordered repatriation of some ancestral remains, roughly 1,676 Ainu remains were still held in Japanese universities. Meanwhile, in 2020 the Japanese government opened its National Ainu Museum (Upopoy), consolidating all domestic Ainu remains under one roof. Contestations for how ancestors should be memorialized and honored oscillate between two poles. On the one hand, some Ainu communities have employed legal modernity using settler tools like the courts to repatriate ancestors. In contrast, others advocate to continue genetic research on these ancestors and thus boost Ainu indigeneity, which invokes a bio-genetic modernity. This talk explores how Indigenous modernity through bio-genetic tools such as DNA and blood testing has been pitted against legal and political tools of modernity such as backing indigenous sovereignty through the UN Declaration on Indigenous Rights, and centrally, self-determination over Ainu ancestors themselves.

ann-elise lewallen is an engaged anthropologist and Indigenous rights advocate. Her research focuses on aid diplomacy, environmental politics and indigenous sovereignty in contemporary Japan and Asia. In her 2016 book, The Fabric of Indigeneity: Ainu Identity, Gender, and Settler Colonialism in Japan (SAR and UNM Press), lewallen engages with Indigenous Ainu women’s production of textile-based clothwork, arguing that it serves as an idiom of resistance against ongoing Japanese settler colonialism. In her current research, lewallen invokes an environmental justice framework to understand how Indigenous communities use embodied practices and Traditional Ecological Knowledge to shape energy development in Japan and India.