East Asian Languages & Cultural Studies > Announcement > Takashima Talks: SPY! The Hunt for the “Enemy Within” During the Battle of Okinawa

Takashima Talks: SPY! The Hunt for the “Enemy Within” During the Battle of Okinawa 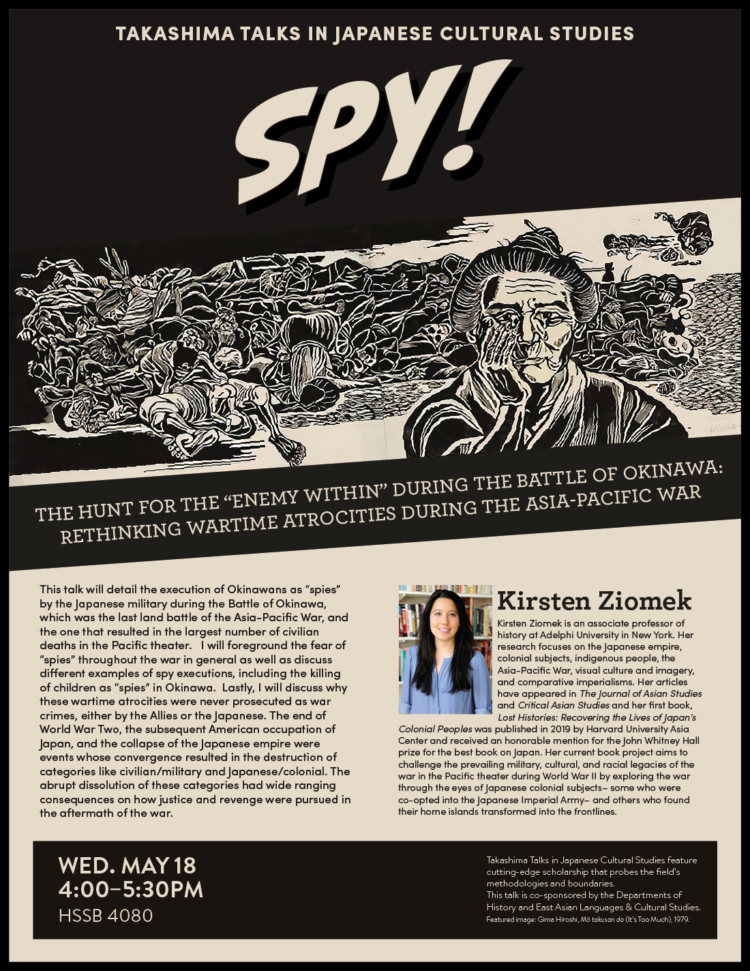 THE HUNT FOR THE “ENEMY WITHIN” DURING THE BATTLE OF OKINAWA: RETHINKING WARTIME ATROCITIES DURING THE ASIA-PACIFIC WAR

This talk will detail the execution of Okinawans as “spies” by the Japanese military during the Battle of Okinawa, which was the last land battle of the Asia-Pacific War, and the one that resulted in the largest number of civilian deaths in the Pacific theater. I will foreground the fear of “spies” throughout the war in general as well as discuss different examples of spy executions, including the killing of children as “spies” in Okinawa. Lastly, I will discuss why these wartime atrocities were never prosecuted as war crimes, either by the Allies or the Japanese. The end of World War Two, the subsequent American occupation of Japan, and the collapse of the Japanese empire were events whose convergence resulted in the destruction of categories like civilian/military and Japanese/colonial. The abrupt dissolution of these categories had wide ranging consequences on how justice and revenge were pursued in the aftermath of the war.